October 29, 2011 was when I had my biggest flashback. It was also my last flashback. I had developed post-traumatic stress disorder back in 1997 after witnessing a tree fall on my father during a fast moving thunderstorm. He passed away 38 hours later, and I was left with grieving the loss while PTSD slowly took over my life. By 2011, not only had I regained my life but I was thoroughly enjoying it. My husband, then my fiance, and I were enjoying fixing up the house we bought 10 months before. We were traveling and socializing with friends on a regular basis. I owned my own acupuncture practice and loved the direction my career was going. Simply this—my life was better than ever.

For about a week after October 29, 2011, it seemed like all of the gains I had accomplished since that horrible accident in 1997 might slip away.

We were home enjoying our first major snowstorm, which was unusual for where we lived in northern New Jersey because we typically don’t see snow until much later in the year. We had heard a ton of warnings from the weather forecasters that trees would come down because of the weight of the snow on the fall foliage, but that didn’t phase me or my husband. Instead, we planned a day at home cooking and watching TV. Towards the end of the day after several inches of heavy snow had fallen, I heard that sound that I can recall quicker than any other sound—the sound of a tree ripping apart. It sounded exactly the same as it did back in 1997 only this time it seemed much louder. In fact, likely it was louder….an enormous tree on the border of our neighbor’s yard had snapped in half and fallen across the road. As it fell, it ripped every electric and communication line that was connected to our house and destroyed two telephone poles. The force of the falling tree rattled our windows and our nerves, so much so for me that I immediately felt I was back in 1997 watching the tree fall on my father and the subsequent rescue scene.

I had experienced a number of flashbacks in the past, especially soon after my father’s accident, but by 2011 the frequency had subsided tremendously. The intensity was significantly less as well, and many times I was able to breathe through them or redirect my attention elsewhere or sometimes move my body to decrease my anxiety. This flashback was different, and after two days of trying to move through it on my own, I decided to make an appointment with a counselor.

You may be surprised to learn that this was my first therapy session for my PTSD. I didn’t wait that long because I didn’t “believe” in therapy. On the contrary, I think seeing a mental health professional is vital, especially during intensely stressful life changing times. After my father’s accident, my mother and I both knew I should see a therapist, but at the time our focus was on getting through a day. Simply calling a psychologist was overwhelming, let alone scheduling an appointment and showing up for that appointment.

Instead, back in 1997 my mom and I were figuring out a lot of things together. She figured out how to financially support herself. I figured out how to hold down a job and return to college. Together we figured out how to go out to dinner with friends, all the while feeling like we were moving through a thick fog. For many years, we made these seemingly small efforts together, and we became each other’s support system. It appeared to be a successful route considering she went on to find love again and eventually I went on with creating a life by my design.

Of course, appearances can be deceiving. Though I was living a good life, I still experienced mild PTSD symptoms. I wrote that off as being “normal”. With everything I had gone through, I thought it was normal for me to feel anxious with thunderstorms, even if the anxiety kept me from meeting up with friends and even when it kept me from pursuing a career in Florida. That cost me an unknown amount of opportunity, but Florida is known for daily thunderstorms in the summer and I couldn’t imagine myself dealing with them on a regular basis. I thought it was normal for me to be triggered by these things and choosing to avoid them was a smart decision. 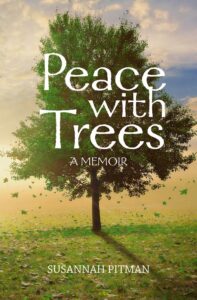 Peace with Trees  – a memoir sure to inspire anyone who has ever expereinced unimaginable trauma. Order here.

Sure, it was understandable for me to be triggered by thunderstorms, wind and the sound of a tree falling, but what I didn’t realize was that didn’t mean my symptoms had to be my forever normal. When I couldn’t get myself back to a good place after the tree fell during the snowstorm, I knew I needed help.

This is how I ended seeing a therapist after having my worst flashback ever….14 years after my initial traumatic experience.

Thankfully, I saw the right therapist. She didn’t admonish me for not coming sooner. Instead, she recognized that I had done an amazing job with figuring out how to move on with my life while discovering healthy habits that made me feel better. When I asked her what I needed to do to get rid of my PTSD symptoms for once and for all, she was simply honest with me—“You don’t.”

Hearing those two words struck me tremendously. Immediately, I felt like I could put my dukes down. For years, I felt like I was fighting against my PTSD symptoms, to suppress them so much that I could tuck them away and not feel them. I thought there was a way, maybe a breathing technique or a meditation or something that could stop the symptoms from ever appearing. I never considered that instead I might have to find a way to live peacefully with PTSD for the rest of my life.

Now when I experience symptoms, I focus on moving through them rather than suppressing them. If I feel the slightest bit of anxiety, I’ll try to breathe through it. If I need to, I’ll do a yoga routine or go to a class. I have found writing to be incredibly helpful as well. All of these are things I can do on my own, but what is most helpful is knowing my husband knows how to help me.

That was one of our problems during the October snowstorm flashback. He kept telling me to relax, but if you’ve ever been in the middle of having a major flashback you know that’s the last thing you want to hear. My therapist wisely asked me to bring him to the next session, and fortunately he was extremely agreeable to come with me. He learned a lot about my PTSD and how to support me. Since then he’s been excellent at being there for me in the best way possible without judgement or reluctance.

Which brings me to the biggest lesson I’ve learned in my journey with PTSD—it is vital to have a support system. Back in 1997, my mother was my support system, and as great of a mother as she was even during those very dark times, I should have had others on my team. I should have had a therapist. I should have involved a small group of close friends who I could count on. Instead, I managed my PTSD mostly on my own. Fortunately, I did a good enough job to get myself to a good place, but it was hard and it took a really long time. Now, I know I can count on my husband, one of my closest friends and my therapist to help me navigate my way out should my symptoms become unmanageable again.

A photo of me living happier and healthier thanks to my support.

If you are in need of support, Contact Us Today.